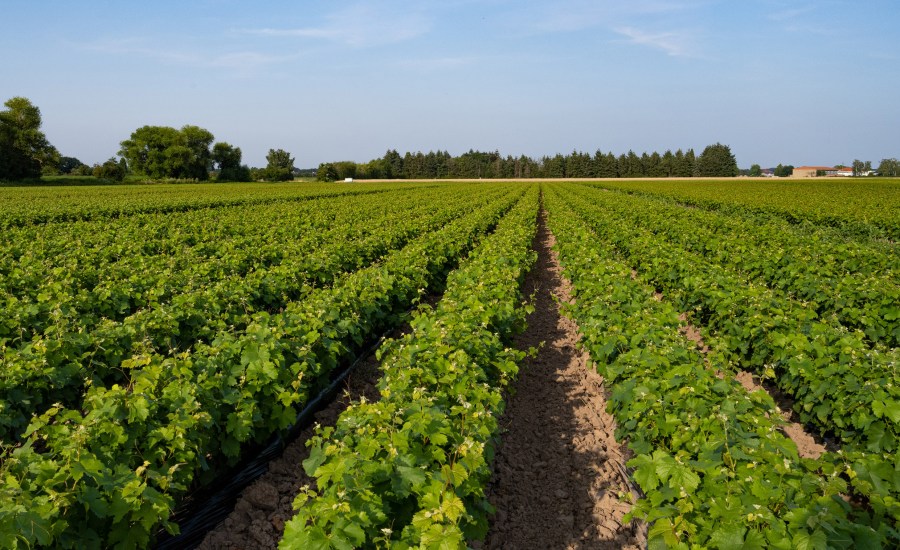 In an occasional A Day in the life of a Viticulturist series, Sam Doncaster recounts what he is doing at Rebschule Freytag, in Germany’s Pfalz region and ventures his opinion about the sort of cutting edge practices he is dealing with.

Vine nursery work is not an area of viticultural activity that gets talked about much, in cooler regions, such as the UK. To a large extent this being on account of a need for goodly warmth in the soil, when planting out young vines into a nursery.

These new young plants, whether they are simple cuttings from a chosen ‘Mother Vine’, or have had budwood from the ‘Mother Vine’ grafted onto a chosen rootstock, are little more than simple, bare, rootless sticks. They need warmth to promote root growth. But there is a lot of work undertaken prior to that.

So much work that while there are seasonal ‘highs’ in activity, there could be numerous places to start to outline the annual round of works undertaken.

Collecting the materials to work with being quite a good place to start thinking about this.

Vine Nurseries prefer to graft up vines as per orders received.

They do, however, run a few speculative vine/rootstock combinations for orders that they anticipate coming later. A nursery is not a supermarket with a few items, which when out of stock can be re-delivered in a couple of weeks time.

With five or six common rootstocks, 25-to-35 common varieties where each one may hold a range of clonal options, plus some more obscure requirements from some customers, perhaps a range of experimental grafting’s to be included in the grafting programme as well, then it is easy to see how the range of products runs into hundreds.

After this, grafted vines commonly come in three different heights, or lengths of rootstock used, and there have been times when there is large demand for ‘potted vines’. These potted vines being grafted, grown on in a glass house, and then planted out in a vineyard all within the same growing season.

Rootstock is commonly grown elsewhere as by a separate company. They supply an ordered number of lengths of straight, cut/trimmed rootstock, with a thickness to match that of the budwood, as collected closer to home.

These rootstock ‘Mother Blocks’ are frequently checked over by visiting senior nursery staff, sometime in the previous growing season.

Nurseries endeavour to cultivate their own selection blocks for budwood. This way they have some control over the quality of the budwood that will be used for grafting.

This can be important for several reasons, but a significant reason being the ease and availability for virus checking alongside ensuring there are no ‘rogue’ varieties giving a mix of possible varieties…within one single order from the customer.

While some effort is given to keeping as much of the activity as close to home as is possible, there are highly regarded colleagues and partners within the industry. A significant benefit of this lies in the possibility to do a little ‘horse trading’, buying and selling of materials like budwood.

While I believe that there are more than 10 hectares of carefully nurtured blocks of vines, all specifically cared for to supply budwood for the nursery, it simply is not possible to hold all vine types and clones, for all possible customer requirements. Because these vines are well managed and hold a good nutrient basis, they also produce good quality grapes…but sometimes only in ‘row-by-row’ quantities.

Small amounts of some new varieties, such as those coming out of the Piwi vine breeding programme, might be destined to a local research station, for trial wine making. But while other larger blocks, such as Chardonnay, come in a range of clonal variation, come the grape harvest it might be more practical to simply run a harvester through the whole lot and sell the grapes elsewhere. However, there is always careful harvesting of budwood for grafting purposes.

Another source of variety for an international vine nursery business, is language. Where I am here, in the Pfalz, Germany, is not quite the hub, geographically, for Europe, it is however very much a ‘cross roads’.

Suppliers of materials and equipment come from far and wide, as do the international lorry drivers.

Customers and those with general enquiries contact us daily from all corners of Europe, and indeed there are international research collaborations as well.

Next come the multi-national labour teams, plus an occasional student or someone seeking practical learning experience. This was how after a few enquiries I ended up here, (from New Zealand.)

I hope that my writing is not a source of alarm for some customers, but by now you will begin to see the beginning, and only the beginning, of how complex a vine nursery is. Thus the accuracy of consistency in production being true to type, is reliant on systems, and very good ones as well.

If a winemaker has a delivery of a truckload of grapes, and from this the resulting wine is perhaps not quite as it could have been, (maybe how it would have been in another person’s hands,) it is unlikely to stand out.

However any mistakes in a vine nursery, and there is nowhere to hide; being there for all to see, and talk about – forever. So systems and discipline are meticulously adhered to as a vine nursery is only as good as its reputation.

After my initial training here I have gone on to work in one capacity or another, in the production of approximately 10 million vines. This is why I can come back here with ease, because the systems are the best I’ve seen, even if I get to hear it all in another language.

Sam Doncaster works for Volker and Marion Freytag, of Rebschule Freytag, Lachen-Speyerdorf, Neustadt an der Weinstrasse, Pfalz. ds in English and Welsh wines in the UK