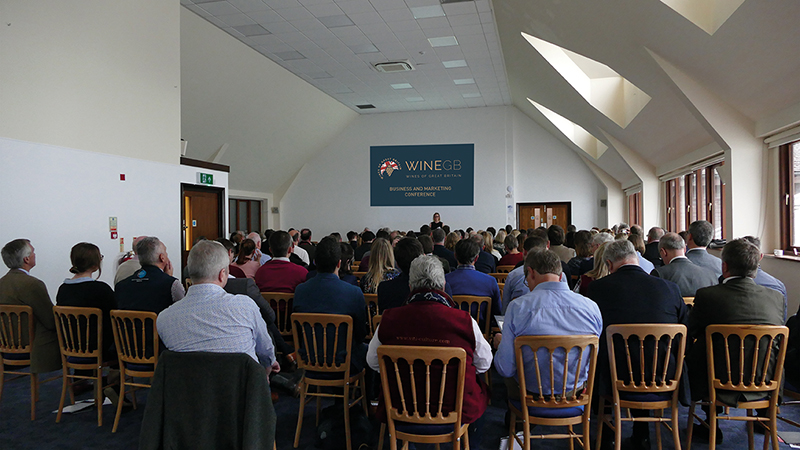 Shaping the industry identity over the next 10 years.

Speaking to over 150 delegates at the WineGB business and marketing conference, held on 30 January at Denbies Wine Estate, chairman Simon Robinson took to the podium to effectively set the scene for the unveiling of the membership organisations’ generic marketing strategy.

Looking back on how far WineGB has come since the merger of English Wine Producers and the United Kingdom Vineyards Association in 2017, Simon considered the rapid growth of what is now considered to be the UK’s fastest growing agricultural sector, the positive initiatives which have already been put into action by the organisation and the challenges still ahead.

“WineGB has come an awfully long way since it was formed and I would like to think we have delivered a lot since the merger,” said Simon, who runs his own vineyard, Hattingley Valley, in Hampshire. “We are probably the fastest growing wine region in the world, with the planting of over 5 million vines in the last 3 years. The average vineyard size is increasing and the market share is improving rapidly, both in the UK and with exports which are shooting ahead. There is a greater concentration on tourism, which is a key part of the UK’s marketing strategy and WineGB have submitted a cellar door relief scheme paper to government, and we will be launching a proper programme to promote this very shortly.”

“In terms of employment, we have moved forward with Plumpton to develop the apprenticeship scheme and the WineSkills courses are moving on well too. We have been working hard to build WineGB into the membership organisation it needs to be. I am proud of what we have managed to achieve and although some aren’t quite sure what we do, believe me, there is a lot of paddling going on under water to keep the swan swimming gently through. Not everything I confess has gone as far, or as quickly, as hoped, but perhaps that is inevitable as we do rely heavily on volunteers who devote a considerable amount of unpaid time to the industry.”

Moving on to consider what the industry will face over the next few years, Simon covered the growth in volume and sales. In 2018, it is estimated that between 12-15 million bottles of wine were produced, a huge increase on 2017. There are no official 2019 figures yet, but it is thought that these will not be far behind, if not ahead of 2018 as vineyards mature.

“We are no longer looking at production levels of 5-6 million bottles per year, but for the foreseeable future, weather permitting, it is likely to be around 12 million,” said Simon. “Our vision document released last year suggested that the industry would be producing 40 million bottles by 2040, but at the current rate of expansion, this is a conservative figure.”

With unprecedented growth, innovation and ambition, WineGB want to ensure that it strikes the right balance in its marketing strategy to promote and sustain what has already been achieved, without stifling the English and Welsh wine industry.

“One of the strengths of our industry is that we are not tied down by regulation which is seen in Europe,” said Simon. “But we do need to make sure that this doesn’t have an adverse impact on the industry as a whole. In future when we look at the new PDO scheme, while the Great British consumer may not understand what it means, it is the legal underpinning of the brand we are promoting and I don’t think you can divorce the PDO scheme from the brand strategy. We must be prepared and clearly focused on what the industry is trying to do.”

With all this in mind, it was concluded that WineGB needed to develop a generic marketing strategy, to clearly define, protect and promote a core brand. The result of almost a year of planning, researching and consultation, the strategy was officially distributed to members after the conference and has now been put into action. Its overriding aim is “to help nurture and protect the status of our products as quality wines” with four clear strategic objectives designed to guide the vision, direction and activities.

“Traditional method is what the entire industry has built its reputation on,” said Julia. “The producers’ response to the consultation survey agreed that we needed to confidently and proactively champion traditional method sparkling wine as the hero style. We need to sustain and grow market perception, here and internationally, by nurturing the trade who are the key to driving this category forward.”

To achieve this, there will be a mixture of regulation and communication implemented. WineGB will be trying to ensure that all labels clearly state the method of production, with 75% of consultation respondents advocating that this should be a compulsory feature on the front label. There was also support for reformed PDO and PGI schemes to protect the credibility of traditional method and a targeted campaign will also be launched to explain why traditional method commands a premium price.

“The idea of a name for English sparkling was rejected by producers in the consultation survey, by the strategy group and the WineGB board,” said Julia. “Having looked at this long and hard, we will therefore not be taking this route. We completely accept that the majority of consumers don’t understand, or care, about how sparkling wine is made but the trade do and we need to ensure that anyone can make an informed choice and that the different styles of sparkling are clearly differentiated.”

If successful in this, then WineGB hope to have reinforced the ‘halo effect’ of traditional method sparkling which will in turn benefit all UK wine styles and methods of production.

Seeking to “actively support the growth of wine tourism in the UK, domestically and internationally”, WineGB will be helping to increase visitor numbers to the cellar door, supporting individual cellar door development/offering, and encouraging the growth of regional groupings/clusters/trails.

“Research around the world highlights the economic importance of wine tourism and it is ideal for all sized vineyards to optimise their direct to consumer sales, show-off their brand and maximise profits,” said WineGB’s marketing manager, Julia Trustram Eve. “We want regions to develop their own self-funded tourism initiatives and will support them by promoting regional wine trails. The next phase of the website will be more consumer-focused and we will also be able to better direct tourism related media enquiries and will be looking to reach out to more travel press.”

As learning from others is an important aspect of building a successful cellar door facility, the WineGB Tourism Working Group will be launching a best practice paper, WineGB will be creating a marketing toolkit for members, and a series of conferences, workshops and talks are also in the pipeline.

Having spent decades trying to educate the public and press on the difference between English and Welsh and British wine, WineGB is now striving to “own the term “British” alongside other terms such as English and Welsh by encouraging its use especially for exports, and to develop brand guidelines.”

“It was time to take the word British back, to better protect it” said Julia. “We want to support its use by producers, particularly within export markets where it is a beneficial descriptor for our wines. The long-term objective is to ban the use of the term British wine in relation to wine made from imported concentrate.”

It will be left up to a producer whether they use the term British wine, or not, and WineGB will continue to focus on the terms English and Welsh. WineGB will be producing brand guidelines and a glossary for producers and there will be clear definitions to communicate effectively with the press, trade and consumers.

To continue to “support the growing importance of still wines”, WineGB will be looking at the exciting prospects and potential of the still wine sector, the category’s role in the UK wine industry and how it can capitalise on the success of traditional method sparkling wines.

“There was a lot of interest in still wines following the 2018 vintage and there are more press articles talking about still red wines too,” said Julia. “There is diversity in the range and still wines provide many of the things that consumers are looking for such as small production, fresh in style, with moderate alcohol levels.”

While there has already been more focus on specific varieties, such as Bacchus, and regions such as East Anglia, WineGB has decided that still wine in the UK is in too early a stage to focus on these as routes for consumers.

“We are planning a consultation process around this in the next year,” said Julia. “In the meantime, we will continue to promote initiatives which include and target still wines, such as Richard Banfield’s Bacchus tasting, and we will ensure that there is a presence for still wines in our own activities and communications.”

The generic marketing strategy objectives will be put into place alongside the membership organisation’s overall role and responsibility to improve visibility and knowledge about English and Welsh wines to create demand.