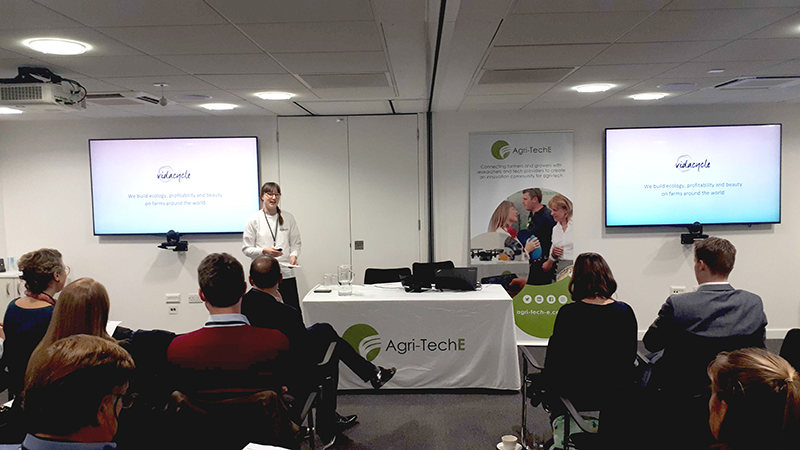 Growers and technologists gathered to discuss the opportunities for innovation and technology in UK viticulture at an event organised by Agri-TechE on 11 February 2020 at the Cambridge Science Park.

The networking meeting was titled ‘Nothing to W(h)ine About – Uncorking the Opportunities for Innovation in Viticulture’.  According to speakers climate change; technology designed to help change the way vineyards are managed and inform decision-making; and a focus by breeders on creating new varieties adapted for local conditions, promise rapid growth for the industry.

Identifying the best sites and varieties

On the subject of red wine production in the UK, NIAB EMR is focusing on the potential of Divico, deemed by the research vineyard as one of the region’s most promising new red varieties. It is disease resistant and early ripening and 50-ha of plantings are planned for the next couple of years.

As global warming across Europe is placing pressure on traditional red wine regions, the cooler English climate may soon be more conducive to these varieties. At NIAB EMR, in East Malling, Kent, senior research scientist, Julien Lecourt, and his team are currently using the facility’s research vineyard to work on a project named ‘Britadapt’ in collaboration with the University of Bordeaux.

Forecasting which varieties of grape will be best for future viticulture in the UK, the project is looking at 13 varieties. Five of these varieties are already largely planted in the UK, with the other eight considered as not yet suitable for our climate, but are indicative of which varieties could be grown in the future. With the first harvest obtained in 2019, the data collated will be used to model the varieties which are going to be suitable for our climate.

Julien Lecourt, senior research scientist at NIAB EMR, explained that temperature rises are not going to make the UK the new Spanish Riviera: “Our climate is going to remain categorised as ‘cold/cool’ for viticulture and climate change predictions forecast more extreme events such as late frost. However, warmer temperatures can also mean higher diseases pressure.”

Speaking at the event, Dr Alistair Nesbitt, CEO of Vinescapes, said: “Projections are for warmer, drier summers. All else being equal this will aid viticulture in the UK and potentially open up the possibility of different wine styles and other varieties. The last 30 years have seen significant warming during the UK growing season, which is why we can now grow the marketable varieties, such as Chardonnay, Pinot noir and Pinot meunier.”

Looking at how technology and data can better inform growers on suitability of a vineyard site, Alastair led a report which assessed the areas of the UK that would be suitable for viticulture. It identified that nearly 35,000 hectares across Kent, Sussex and East Anglia are not currently used for grape cultivation, but may offer advantages. In particular, East Anglia was highlighted for its low frost risk and significantly lower rainfall than the South East.

For East Anglian farmers looking at this data as an opportunity to diversify Alastair warned that: “Viticulture can be more profitable than some more commonly grown arable crops but much depends on quality, route to market and overall business structure.”

A viticulture suitability model for England and Wales has now been developed by Vinescapes. It uses a process called Fuzzy Logic to overlay high resolution datasets of topographic, soil, land use and climatic variables to identify and grade land suitability. To help decision-making the company also offers a Climate Vine service, which looks at the growing conditions in the vineyard.

The withdrawal of chemicals and less acceptance of chemical treatments by consumers, heightens the need to breed varieties of grape that can tolerate disease pressures. This need also extends to improving pest resistance.

Speaking at the event, Claire Donkin, technical associate at Global Plant Genetics, commented that it is not only conditions for the plants themselves that are changing but also the background pests and diseases. With this, a multi-level approach is needed to give plants a healthy start and a robust resistance to environmental change.

“Nematodes are a major pest in vineyards – they feed on vine roots and compete with the roots for nutrition as well as causing damage and transmission of disease,” said Claire. “In short cycle crops they can be controlled through rotation, but in a long-term crop like grapes the populations can build rapidly, especially where ground is replanted.”

Claire warned that when the environment is good for the host, it is also good for the pest and the risks are increasing. There are six main groups of nematodes which feed on the root systems and transmit viruses that can reduce the plant’s ability to respond to stress. A recent research study which carried out four random checks in the UK, found the Dagger nematode, that reduces the yield of Pinot noir by 80%, present at two of the sites.

While soil treatments are widely used in continental Europe to control pests, the chemicals are being withdrawn from use. There are a number of alternative approaches:

• Use of cover crops such as mustard

• Improving the resilience of the plant through irrigation and nutrition

• Using a rootstock that offers resistance to the nematodes.

“At Global Plant Genetics we are looking at improving the rootstock to enable resistance to phylloxera and nematodes,” said Claire. “This is a new development for the UK and we are working with growers to support future expansion.”

It was discussed that identifying actual disease risk and enabling a window for spraying will greatly improve profitability. Guy Thallon at FERA Science commented that a pilot of its virus spore monitoring system was able to give a warning 11 days before pathogen damage was visible on the leaf, providing evidence of a threat before spraying.

Other projects include the ‘Big Soil Community’, which is looking at the microbiology of the soil, taking a systems approach. Rather than attempting to identify all the microorganisms in a soil it is able to take a ‘fingerprint’ to give an index of soil health.

Turning to data driven vineyard management and looking at how technology which improves productivity can help profitability Annie Landless spoke about Vidacycle’s Sectormentor software. The collection of tools is already enabling more informed decision-making in the vineyard, with the Ripeness Indicator highlighted for its ability to enable the winemaker and vineyard manager to compare the ripeness curve between different sites, in real-time, to see how the acids and sugars are progressing and therefore support better decision-making at harvest.

“Using the tools to look at historical data we can clearly see that ripening dates have gradually shifted earlier and earlier over the last 20 years.  There is no doubt things are changing and the summers do appear to be getting hotter,” said Annie Landless of Vidacycle. “Certainly, the reality of climate change is that everything becomes less predictable and more extreme, so building resilience becomes more important. A healthy soil is the ultimate buffer and we encourage people to build soil health with regenerative agricultural practices to improve water retention and bioavailability of nutrients.”

Co-owner of Flint Vineyards, based in Norfolk, Ben Witchell told delegates that many of the early varieties of grapes grown in England are providing wines with subtleties superior to those of their German origins.

Flint, which focuses mainly on Bacchus and produces around 30,000 bottles a year, became the first winery to undertake sponsored research using gas chromatography and multispectrum analysis to understand the aromatic profile of wine.

The findings have already been used to inform cultivation and winemaking, for example the importance of skin contact during pressing in releasing aromas was revealed. Ben now uses inert gas to protect the volatile aromas from oxidation and other technologies are also employed in the vineyard, including electrostatic spraying, which uses charged droplets to reduce loss through dripping and reduce the water requirement and spray rate.

The networking meeting was organised by Agri-TechE, a business-focused membership organisation that is supporting the growth of a vibrant agri-tech cluster of farmers, food producers, food processors, scientists, technologists and entrepreneurs with the aim of accelerating innovation in agriculture.

“The improved quality of the product and the benefits it offers for carbon storage and regenerative agriculture are making viticulture an interesting option for growers,” said Dr Belinda Clarke, director of Agri-TechE. “Contrary to popular belief, I don’t think there is a reluctance from farmers to invest in new technology. The concern is more of the risk of it going wrong and the impact on the bottom line. The challenge is how to create a viable business model to support its adoption.”