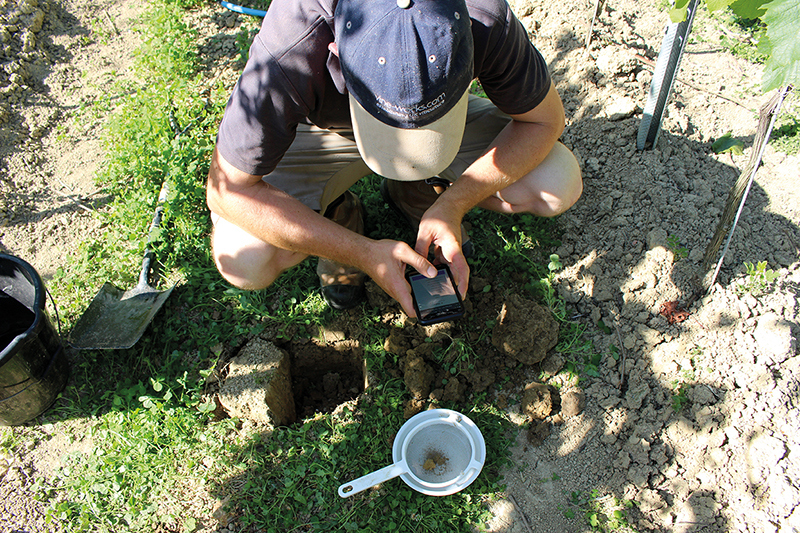 As we established in our soil biology article last month – microorganisms in the soil are extremely helpful as they can dissolve insoluble nutrients in the soil below and bring them to the plant in a soluble form. Micro-organisms also secrete glues and slimes which hold the soil structure together, forming aggregates – the structural basis of healthy soil. We also highlighted that traditional soil lab tests do not effectively test how good the soil biology is and what nutrients your plants really have access to. So together with farmers and leading soil scientists we’ve curated a series of simple tests that enable farmers to investigate the biology in their soils. The tests include measuring earthworm populations, the diversity of the plants above ground, % bare soil, and a Visual Evaluation of Soil Structure (VESS). You can find a protocol for how to do these tests on our website vines.vidacycle.com. These soil health tests are similar to the Visual Soil Assessment Guidelines for Vineyards released by the UN’s Food and Agriculture Organisation.

This month we wanted to give you an example of how these soil health tests are being used in the UK. Our software, Sectormentor for Vines, makes it easy to setup sampling sites to do these tests and then record and benchmark your results. The beauty of gps-located soil sample sites is that you only need a few sites across a large acreage to learn about how your soils are responding to management practices. As long as you return to the same location year after year you can understand from trends how your soil is responding – what works and doesn’t work to build soil health at your site – and then your soil observations can quickly be translated into management decisions.

Vineyard management company, Vine-Works, have been trialling different mixes of cover crops with diverse root systems between their vines on their home vineyard – Bee Tree – in an attempt to improve soil biology. They wanted to understand the effect different mixes and sewing times have on soil structure and biology. They started using Sectormentor to monitor the soils at their vineyard choosing sample sites to assess soil health based on the different cover crops.

By comparing between different rows that were next to each other but had been managed slightly differently they were immediately able to see some stark differences in how the soil was structured and stored water. One row where the cover crop (sewed last Spring) had never taken, performed significantly worse than the neighbouring row with a cover crop that was well established from the year before – the infiltration time was longer and soil structure more compacted and blocky. They could see the impact the living roots were having in building soil biology. These simple observations have already caused Vine-Works to change their management strategy. It’s clear that actually a healthy cover crop is vital between rows, so they decided to prioritise planting their cover in Autumn to give it plenty of chance to establish and reduce the risk of compacting and eroding the soil. It will be interesting to see how the soil differs when they look again later this year after replanting the cover crop in Autumn.

After experimenting on their own vineyard, Vine-Works have just started to include soil health testing with Sectormentor as part of their Technical Scouting Service. The next agricultural revolution is the biological and regenerative revolution. If you want to be part of the future of viticulture and farming then building soil health through regular observation, experimentation and learning from visual soil assessments must be one of your top priorities.