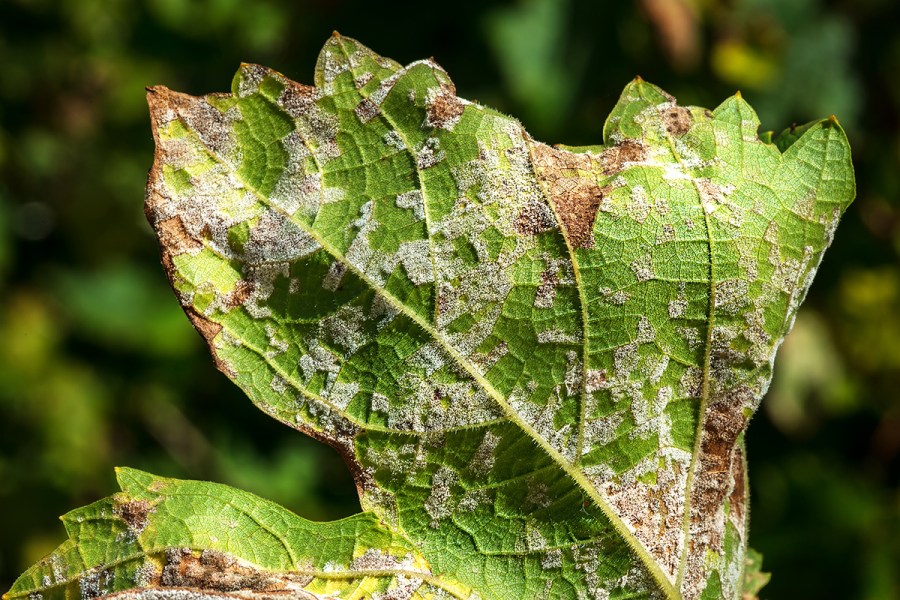 Strict vineyard hygiene will be vital over autumn and winter to reduce the chances of this year’s high Downy mildew incidence having a lasting legacy on next year’s crop. Hutchinsons Rob Saunders and Chris Cooper explain more about managing the risks.

Downy mildew is caused by the pathogen Plasmopara viticola and has been a significant problem in many vineyards this season, particularly in south east England, where unsettled weather disrupted and prevented spraying programmes at crucial points during the season.

Those that managed to stay on top of treatment programmes will be thankful to have stayed in a largely protectant situation, however where control has been compromised, it is worth noting that crop pathology research shows a clear correlation between high levels of spore loading in one season and heightened disease risk the following year.

It will never be possible to eliminate the underlying disease risk, even on sites that have stayed “clean” this year, but employing some good crop management practices over coming weeks will help to reduce the potential infection of new growth when it emerges next spring.

Downy mildew spores, from fallen leaves, fruit and other infected plant material, overwinter in the soil and litter layer beneath vines, so strict vineyard hygiene will undoubtedly help to reduce the level of spore loading going into winter.

Generally the most effective solution is to remove plant material and burn it, although there are obvious logistical challenges to doing this on large sites, especially at a time when labour availability is already under pressure.

Even where material is destroyed, rather than mulched and returned to the soil, beware there is also still likely to be a high level of inoculum remaining in and around the vines from spores that have already fallen onto the soil surface.

It is thought that enhancing soil biology could offer some beneficial effects for controlling this infection risk as many species of fungi act as biocontrol agents, consuming or destroying disease spores in the soil.

Free-living fungi of the Trichoderma species, for example, are common in soil and root ecosystems and researchers have shown them to offer significant benefits for suppressing the microorganisms that cause a number of diseases in various crops, including grapevines. The Trichoderma fungus is hyperparasitic on many microbes, including Downy mildew.

Over large areas, it may not be possible or economically viable to directly add sufficient amounts of Trichoderma to the soil by using specially formulated products, however it is logical to assume there will be some benefit from “feeding” soil biology to enhance general microbial activity. This could be through a variety of means, such as by adding compost, urea, or molasses.

As chemistry becomes more limited across crop sectors, it is increasingly important that we investigate how such biocontrol options can be better integrated into future disease control programmes. Similar techniques are already employed by some apple growers for scab control; scab overwinters on leaf litter, so pulverising leaves or adding urea to balance the carbon-to-nitrogen ratio and enhance leaf breakdown has been shown to reduce subsequent disease pressure.

After a late start to the 2021 season and a very dull August, many growers will not be picking later-maturing varieties like Chardonnay until well into October or early November. Indeed for many growers, one of the biggest challenges is getting bunches ripened before the weather deteriorates.

It is vital to protect crops from mildew and botrytis right up to harvest, making use of products with minimal or no harvest interval, such as Botector.

Maintaining effective nutritional regimes is also important. Boron, manganese and zinc, for example, have been shown to help improve sugar concentrations in grapes, and there are a number of different products available to help optimise quality.

Research has also shown foliar nutrition products such as Zynergy (containing copper, zinc and sulphur) and a good quality phosphite such as Phorce can trigger the natural defence mechanism in vines and markedly reduce downy mildew infection.