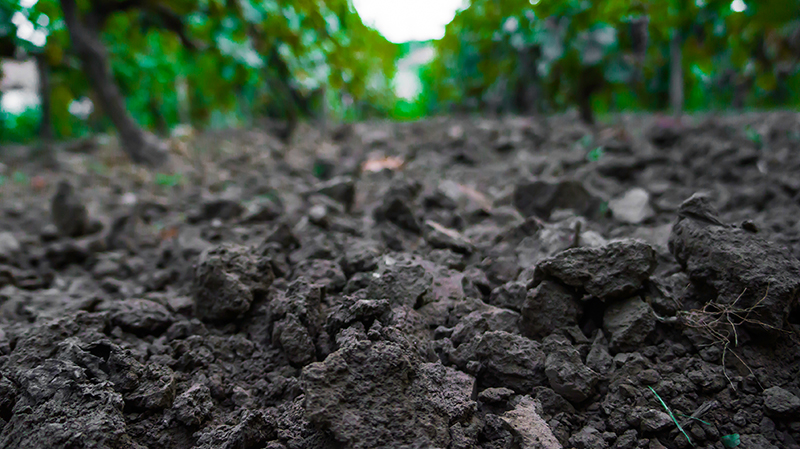 Whether planting new vines or managing a well-established vineyard, good site preparation makes all the difference for the season ahead, as Hutchinsons’ Rob Saunders and Chris Cooper explain.

The French phrase “Terroir” describes the uniqueness the landscape brings to wine flavour, and many factors influence this, including site selection, topography and soil. Correct soil management, nutrition and weed control are important in all vineyards to bring out site characteristic flavours in the grapes.

Understanding your soil’s health, biodiversity, nutrient status and structure, plus issues like compaction, acid patches or poor drainage is fundamental when making rootstock choices and future management decisions, so it is worth getting a detailed assessment done. Hutchinsons offers two services; Healthy Soils assessment and Terramap digital mapping.

Nutrient levels are inherently variable, but after a wet winter, soil testing is particularly worthwhile to determine the extent of any leaching losses. Nitrate losses are expected, but soil available nitrogen is not the easiest to test for and quantify.

Phosphate and potash are key to root development in new vines, so ensure soils are at Index 3.

Nutrients have to be readily available to plants when needed, so remember some applied fertilisers take time to be converted into an available form (e.g. urea is converted to ammonia then nitrate – only nitrate can be taken into roots). Nutrients also take time to move through the soil profile and become available for root uptake.

Foliar magnesium applied as soon as enough leaf area has emerged is a routine requirement, as magnesium is key to chlorophyll production, and some rootstocks – notably SO4 – seem poor at accessing magnesium in the soil. Remember, mancozeb applied for early Phomopsis control will also contribute manganese to the leaf.

Tissue testing is a proven way of identifying nutrient deficiencies before symptoms are seen and petiole analysis should be done at early flowering to determine future foliar nutrient applications. Results typically take less than five working days and will highlight any sub-clinical nutrient deficiency before becoming apparent in the leaf, allowing extra time for remedial treatment.

Vines are susceptible to waterlogging, so good drainage is essential, as is removing compaction which inhibits water infiltration and restricts root growth. Land being planted with new vines should be subsoiled where necessary and cultivated to 25cm depth to produce a clod-free fine tilth.

Hutchinsons also has access to faster-growing mixes, and if you have access to ‘cut-and-throw’ machinery, mowings can be thrown onto the bare strip under vines to break down, adding nutrients and structure.

New vines don’t like weed competition for light and nutrients, which slows establishment and delays production.

Weeds under established vines must also be managed, as they allow damp microclimates to establish below vines, increasing mildew and botrytis risk.

For those spraying ground before planting, remember residues from herbicides based on sulfonylureas, and to a lesser extent 2,4 D, can affect establishment, so allow sufficient time between spraying and planting for actives to be broken down. If unsure consult your advisor.

Glyphosate and carfentrazone can be used closer to planting and around established vines.

Applying a biodegradable mulch based on potato/maize starch for ground cover around the base of vines offers effective non-chemical weed suppression. Unlike plastic grow tubes which can trap air, increasing frost or heat damage, vines remain open to the elements making spraying and pruning straightforward. We are seeing good results from the product, although the mulch is lasting beyond its two-year life expectancy.

Trunk diseases are a particular risk where large cuts were made over winter, and vines should be treated with early sprays containing tebuconazole in co-formulation with sulphur or trifloxystrobin.